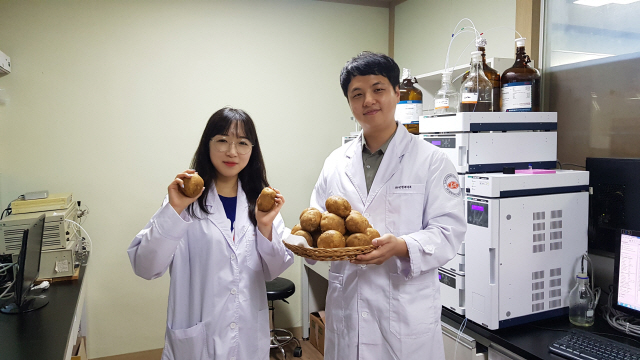 Danjoungbio Co. Ltd., a company that researches and produces active ingredients of cosmetics and food raw materials and plant-derived natural resources, is contributing to the creation of high added value in agricultural products, such as succeeding in developing cosmetics made with potatoes from Gangwon-do.

It is actively developing raw materials using edible crops such as sorghum, buckwheat, pearl barley, bellflower, and rice, and is seeking a path for win-win with local farmers by establishing a research team dedicated to increasing farm income.

Agricultural products cultivated in Gangwon-do area have high content of active ingredients and are used as main raw materials because they are cultivated in clean areas. Antoxyl S II using Sorghum from Wonju, Gangwon-do is a fermented Sorghum raw material for cosmetics. It is used as an effective protection against ozone and nitrogen dioxide.

In addition, INFlazyme_BLACK is an extract made by Pyeongchang, Gangwon-do’s Angelica grown in an environment with a high insolation. Angelica is steamed and dried 9 times and has anti-inflammatory and anti-allergic effects.

There are hundreds of cases that Danjoungbio developed as raw materials using local specialty products or native plants in Gangwon Province. Especially, when the market for potato farmers in Gangwon Province was blocked by Corona 19 this year, Danjoungbio started developing the ‘Synodia Gangwon Potato Line’ which helps local farmers and symbolizes the region at the same time.

It is safe and honest because it uses potatoes from cool region in Gangwon-do and does not add parabens, artificial colors, or phenoxyethanol. It is also attractive in terms of ethical consumption such as conducting research without animal testing.

The advantage is that it gives a moisturizing feeling without irritation, and two types of ‘Synodia Gangwon Potato Hand Cream’ and ‘Gangwon Potato Body Lotion’ are expected to be released. CEO Eui-Su Choung said, “In addition to promoting the excellence of local organic crops and native plants, we will continue to seek ways to help revitalize the local economy through cooperation with farmers.”